Methods to get insights about users’ monitoring behavior either depend on the expertise of Human factor experts to model and predict stereotypic monitoring behavior or on performing eye tracking studies in simulated environments, which require subjects to be physically present and usually to be tested successively.

The Human Efficiency Evaluator (HEE) supports subject matter experts (SMEs), such as HMI designers and domain experts with no background in cognitive modeling to generate and benefit from attention predictions. With the HEE predictions can be performed by a cognitive human operator simulation in a very early design phase where only HMI design images or sketches of future interfaces are available. The HEE uses the Adaptive Information Expectancy model (AIE model) [Wortelen, 2013], which is based on the SEEV model [Wickens, 2003] and is a dynamic simulation model of attention distribution.

Monitoring in the Maritime Domain

A ship bridge is an example for such a safety-critical system. Modern bridge systems offer a broad range of automation of routine tasks and most of the navigation decisions (passage planning for instance) can be performed prior to the voyage. Therefore most of the time on a ship bridge is spent on the navigation monitoring task. This includes observing the ships status, its navigation path and watching out for future events that require adjusting the planned route of the vessel’s by changing its speed and heading to prevent dangerous situations. 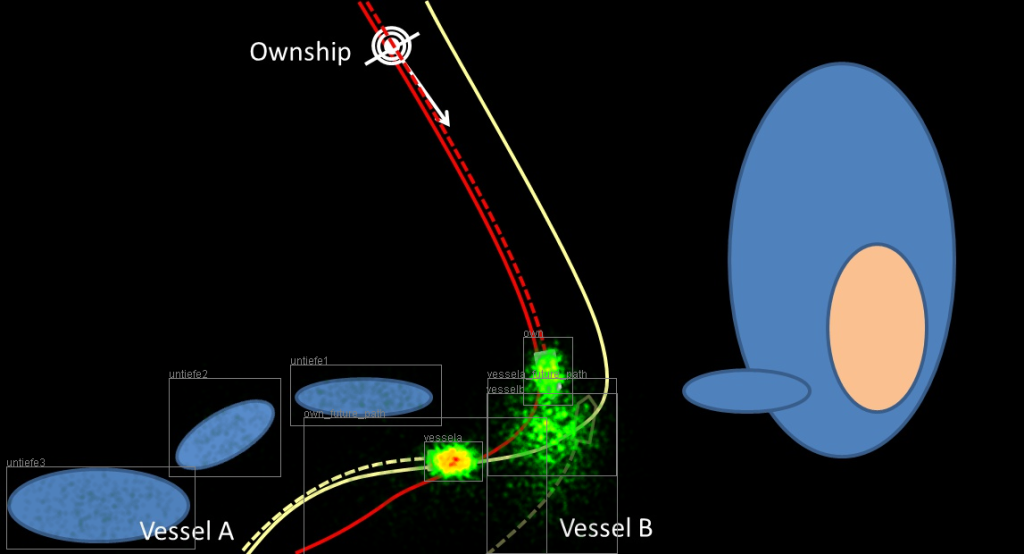 Heatmap of an attention prediction in the maritime domain

Studies show that in between 75%-80% of accidents in ship navigation happen because the human operator had not access to information that could have prevented the accident [IMO,1999]. A study that investigated the lack of situation awareness of mariners revealed the importance of situation awareness for the decision making process in the maritime domain. From the 177 maritime accident reports analyzed, 71% percent of the human errors were situation awareness related. 58.5% of those could be classified as caused by failures in correctly perceiving information [Grech, 2002]. These types of failures are caused by data not being available, data not being easy to discriminate, misperceptions or failures in monitoring or observing data [Grech, 2002].